Moto Razr 5G First Impressions: Do a Glass Body and Powerful Specs Give This Razr an Edge Over Other Foldables?

So far, the second wave of foldable smartphones has been looking promising. We recently tried out the Samsung Galaxy Z Fold 2, which polished the raw experience of the original Galaxy Fold. Now it’s time to check out the new Moto Razr 5G. We got to spend a day with the refreshed Razr, and it is basically the same Moto Razr that launched in India earlier this year but with a few upgrades and a price tag of Rs. 1,24,999. Are these changes major enough to make a huge difference? Here are my first impressions.

The plastic body is gone in favour of a glass-and-metal sandwich. The fingerprint reader is now moved to the back and supports swipe gestures. You also get a Qualcomm Snapdragon 765G SoC, up from the previous model’s Snapdragon 710, paired with up to 8GB of RAM and 256GB of internal storage. The 5G moniker comes from this SoC’s ability to support millimeter wave technology.

At the back or front, depending on how you hold it, the Razr now has a 48 megapixel primary camera. The selfie camera above the inner foldable display has also been bumped up to 20 megapixels from a measly 5 megapixels. The battery has received a minor upgrade — it’s now a 2,800mAh pack, which is a 300 mAh improvement over the previous gen. However, the battery capacity is still below 3,000mAh to keep the smartphone slim.

Finally, Motorola has also tweaked the hinge a little so that the foldable display is better secured. Moto says the gap between the two sides of the display is now thinner than a piece of paper, but it really depends on the kind of paper you’re using.

Honestly, the first thing that came to my mind when you hold the Razr 5G is its flaunt value. It’s compact and fashionable. Opening and closing the phone will definitely make you feel like a very important person, even if you’re at home doing it for kicks. The glass is a nice touch and it makes the phone look and feel more contemporary, but also makes it a fingerprint magnet.

Once you open and close the Razr 5G a few times, you’ll immediately realise the fidget potential of this smartphone. Opening and shutting the phone is pretty satisfying. Motorola did say that this hinge has been tested for more than 2 lakh folds and unfolds, which, it says, translates to about three years of heavy use. 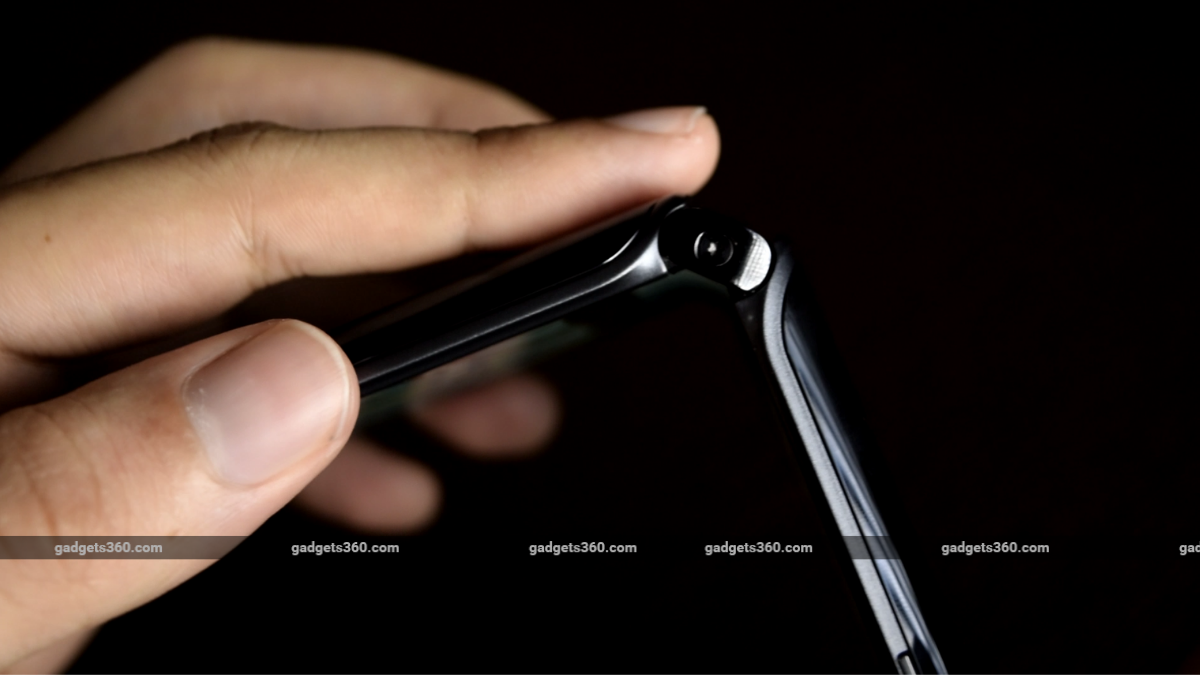 Motorola says the Razr 5G’s hinge has been tested for more than 2 lakh folds and unfolds.

The clamshell design makes this phone much easier to fold and unfold. But it does take a bit of time to get used to the action, especially if you’re doing it one-handed. While the frame of the smartphone has a slight chamfer, I would have preferred a lip or an indentation where I could insert a thumb to open it more confidently.

Also, the lock button and the volume rocker are really tiny. In fact the latter is precisely the size of an iPhone’s lock button. So you’ll have to make an anxious jump every now and then if you want to change the volume. You’ll also have to do acrobatics if you want to reach the top of the screen for some reason because of how tall it is. Luckily, the fingerprint reader does support a gesture to pull down the notification shade and quick shortcuts.

Let’s come to displays now. The interior folding display is good, and although the refresh rate is still 60Hz, it has good contrast and vibrant colours. More importantly, its texture is really nice, which will encourage you to use it. Unfortunately, because of the way the hinge is designed you get three creases instead of one. That may be off-putting to some, but it didn’t bother me much. 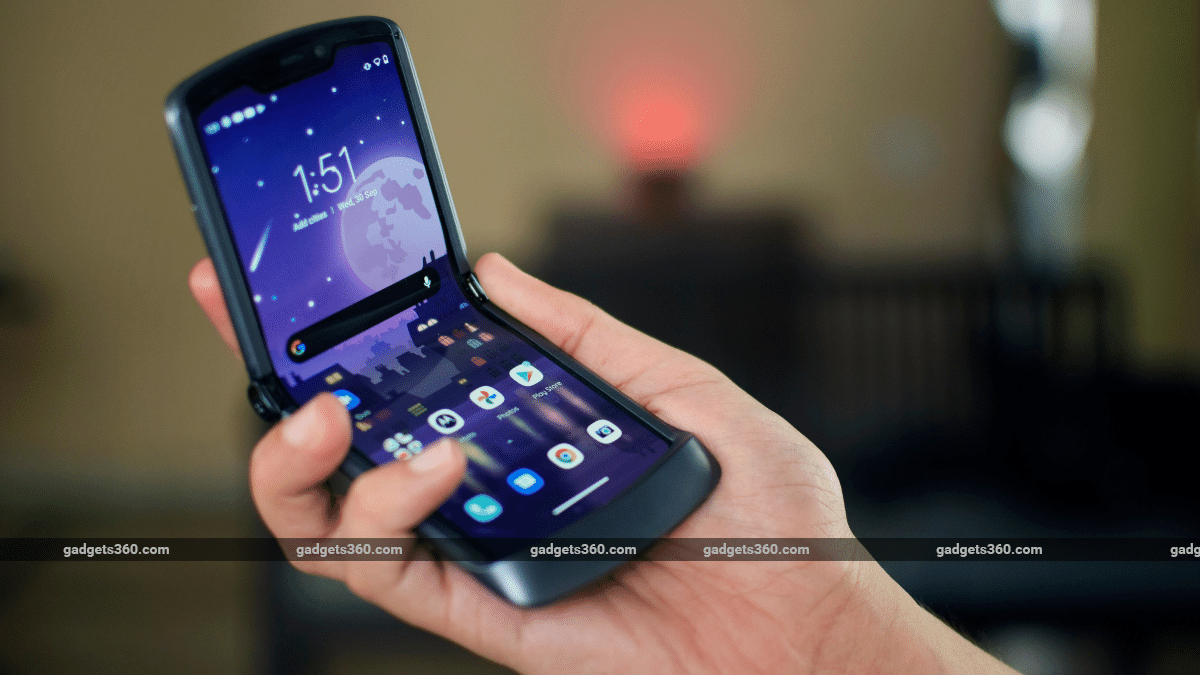 Sadly, unlike the Galaxy Z Flip, the Razr isn’t designed for half-folded use, so you miss out on some of the cool functionality offered by Samsung’s Flex Mode. I would have loved to place this phone half-folded on a table while having lunch and watching something on YouTube instead of awkwardly resting it against something. The phone’s packaging actually doubles up as a stand and passive amplifier, but you really can’t take it everywhere.

Coming to the secondary display — it’s a mixed bag. It’s a bit too small for enjoying any content on, and has a tendency to be really hyper and wake up all the time. On the other hand it really does help at times when you cannot flip the Razr open. Be it notifications or even changing the track on your playlist, it just makes little tasks much easier. Typing is awkward, but you could be sorted if you have swipe typing enabled. Also, the outer screen now supports even more apps, which may be a good thing if you ever get bored of opening and closing the smartphone.

The Moto Razr 5G runs a very clean version of Android 10, which is called My UX. Except for some actually useful gestures and the classic Astro Odyssey game, you get no bloatware. It’s actually a rather vanilla Android experience. I liked the fact that while it’s minimalist, it is also surprisingly customisable. Gesture navigation can be a bit tricky at times, especially swiping up to go home, because the chin’s protrusion always gets in the way.

I can’t comment on the performance of the phone in detail this early, be it the processor or the battery. However, it does feel snappy overall. Weirdly, because of how the components are placed, only the bottom half gets warm when this phone is subjected to heavy tasks. Gaming is surprisingly fun too. While the Razr doesn’t fold halfway, you can bend it just a little bit to have a really comfortable grip while playing games. The texture of the foldable display does wonders too.

The Moto Razr 5G ships with an 18W charger, a power cable, and a Type-C to 3.5mm jack adapter. Very thoughtful, thank you.

Coming to the cameras, at least one paper, the new 48-megapixel sensor can now finally go head-to-head with most mainstream phones. I’m even happier that you now have a better selfie shooter so that you don’t have to rely on the main camera for everything. If you are still using the main camera, here’s a pro tip — hold the phone upside down. It can match that orientation and you’ll be able to hide your double chin and look a bit less awkward.

Again, I only had limited time with the device and so I can’t give a final verdict about photo quality yet. I did observe an interesting quirk in the camera app, however. While everything is beautifully organised on the bottom, the settings button sits in the top right corner. It’s something you might use frequently but the tall screen makes it difficult to reach.

To sum it up, although on the surface the Razr 5G looks like just an incremental upgrade, it feels like a significant one after using this phone for a short while. It is not as underpowered as its predecessor and is even more stylish. The vertical hinge also makes it relatively practical for everyday use. Sadly, at Rs. 1,24,999, it’s still out of reach for most people, and its durability is yet to be established. If you are the kind of person who is bored of conventional phones, or who just loves attention, you might want to check out the Razr 5G.

OnePlus 8T leaked specs look great but where is the cheaper Nord? We discussed this on Orbital, our weekly technology podcast, which you can subscribe to via Apple Podcasts, Google Podcasts, or RSS, download the episode, or just hit the play button below.

Apple prides itself on setting trends and not following them, and the iPhone 12 mini is a prime example of that. In a...
Read more
Technology

Micromax In 1b, the new smartphone by the Indian vendor that is yet to be available for purchase in the country, will be...
Read more
Technology

Samsung Galaxy S21 series will have Bixby voice as a biometric method to unlock the phone, according to a report. The smartphone series...
Read more
Load more